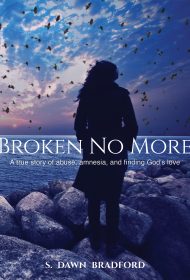 In her painful but ultimately uplifting memoir, Broken No More, S. Dawn Bradford recounts terrible childhood abuse, years of recovery through multiple therapies and finally acceptance of self.

Bradford begins with a short history of her impoverished family, two marriages and her children, three biological and two adopted with special needs. In her late 30s, Bradford began to question why her life had been wracked by physical illness and mental torment. Diagnosed with periodic paralysis, confined to a wheelchair and chronically depressed, she wondered why she could remember only fragments of her youth.

Years of therapy uncovered dissociative amnesia, which had wiped out memories of boys raping the adolescent Bradford. Later she discovered she had dissociative identity disorder, a mechanism the eight-year-old had used to cope with abuse by men. “I split into two little girls…like twins separated at birth,” she said, pretending everything was okay but enduring weekly torture.

The author learned that her paralysis and depression were manifestations of the violations she had experienced but forgotten. She joined support groups, went on retreats and had extraordinary therapists, but above all she had a husband, Chad, who stood by her through painful years.

Bradford writes with grace and assurance remarkable for a first-time author. Regarding her desire to free herself from the memories, she writes about metamorphosis in her preface: “When the process is complete, the butterfly has to free itself from its self-made prison. If it doesn’t get out, it dies … Every butterfly is a miracle of strength and endurance. I was never satisfied as a caterpillar. I was born to fly.”

She includes poignant details without overburdening the reader; for example, she recalls hearing Mr. Rogers’ Neighborhood on TV as she was assaulted in another room.

Bradford hopes her story will be useful to other survivors, their families and therapists. This heart-rending narrative has surely accomplished that goal.