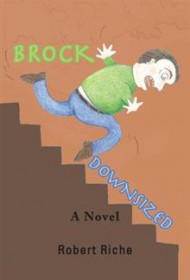 Bill Brock is facing the new reality in this timely novel. Once a high-level communications manager for a large company, the 59-year-old struggles to make sense of his life when his employer goes belly-up. His artist son lives in an ashram; his daughter is dating a married man and his father is being kicked out of his apartment in a care facility. To make matters worse, his new next-door neighbor, Dominic, is a particularly shady character.

Anyone who has faced the job market in recent years will find Brock’s situation relatable and amusing, from his sending out dozens of applications in pursuit of a new job to succumbing to the bathrobe-and-breakfast lure of daytime television: “It astonishes me, but it turns out that daytime television can be very appealing, actually. “ Brock is miffed when his wife snaps off the TV just as Judge Judy is airing.

Despite the implausibility of all that, the author manages to wrap up the book in a more credible way. Brock has to come to terms with the new normal, which may or may not include future employment. When Riche points the spotlight on Brock’s emotional ups and downs, the book shines; a pleasant diversion, right up there with Judge Judy and daytime TV.