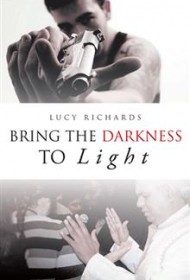 Hardworking Maine farm families are just getting back on their feet after the Great Depression in this idealistic debut novel by longtime Mainer Lucy Richards. With Bring Darkness to Light, Richards celebrates wholesome country living and faithful service to God even when the ways of men would make the most pious preacher doubtful of His good intentions.

Romance is in the air on the Pelletier farm, when wealthy logging industry heir Jake Perrault happens upon beautiful Estelle Pelletier and her siblings bringing in a crop of hay. The enchantment is instant and mutual. Soon Estelle is nanny and teacher to Jake’s 3-year-old daughter Katy, in a role that will be familiar to any Jane Austen fan. The family tree quickly expands to include Jake’s charming brother David, who fancies Estelle’s sister Helen. Sparks fly, weddings get planned, and harmony prevails.

Except that there’s an evil force in town, an agent of Satan who is doing his best to turn good men to the dark side, plying them with liquor and women. The villain is obvious early on, leaving the reader little to speculate on other than how he will be discovered, and by whom. Richards manages to hold off on this revelation until the very end, concentrating instead on an ever-growing cast of characters from long-lost cousins to newborn great grandchildren.

More successful as a romance than a mystery, Bring the Darkness to Light is best read for the authentic rural atmosphere, the charming exchanges between fiancés, and the message that good will always triumph. Readers looking for an old-fashioned love story will adore Jake and Estelle, their loving families, and their unwavering faith in all that is good.