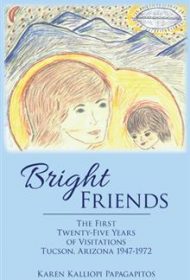 Bright Friends is Karen Kalliopi Papagapitos’s memoir of encounters with extraterrestrials while growing into young adulthood in Arizona.

After raising a family, earning a degree in education, and teaching children of migrant farm workers, the near 70-year-old grandmother found she was finally ready to retrieve her memories and compile them in a form others could learn from. Her account is chronological, covering 25 years of periodic abductions with beings she says were always respectful and kind.

The visits started as early as infancy, she believes, because her mother occasionally found her on the floor beside her crib, occurrences that always remained a mystery. She begins the book, however, with the first visitation she recalls: “I am four years old,” she writes, “and being carried to a beautiful ship surrounded by bright, white light in the desert. It is early morning, and the dew makes the desert fragrant.”

The aliens appeared at her bedside in a cloud of light, so in her young mind, she thought of them as her “Bright Friends.” In the first visits, she was “treated like precious cargo”; as a teenager, she underwent medical procedures, as evidenced by missing breast tissue significant enough that later she had the breast augmented and other curious body issues. Her physical connection with the aliens ended when Papagapitos married and relocated to New York City.

This is an easy read, despite dozens of repetitions and jarring storytelling transitions. (For instance, in one chapter, she is describing an incident at age 15 with her boyfriend in an olive grove when we are instantly propelled to a school situation.) Her sincerity lends credibility to the tale, as does her appearance of being entirely normal. Drawings of the aliens and spaceships are included.

Overall, Papagapitos’ account is one of love and affection for beings she believes played an integral part in shaping who she is today. It’s a largely compelling read that may appeal even to skeptics of extraterrestrials.