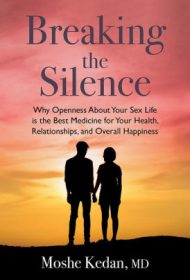 Dr. Moshe Kedan draws on 45 years of experience as a physician in explaining how to have meaningful conversations about sex and sexual issues in his book Breaking the Silence.

Kedan notes that sex is “something that couples don’t talk about” and that “the secrecy, shame, and hostility that often build up when sex is poor, infrequent, neglected, or disregarded can damage people’s health, destroy their marriages, and ruin their lives.” Employing accessible language to explain his well-researched perspective, Kedan explores why physicians typically deprioritize addressing sex in their practices and why couples may find it difficult to talk about sex with each other or with their doctors.

The author lists prevalent assumptions about sex, as well as common issues that can affect libido, and utilizes interesting case examples throughout to explain his approach to achieving lifelong, satisfying sexual relationships.

However, while professing to “do away with the archaic sexual standards and beliefs,” Kedan explores sexual issues primarily through a traditional gender paradigm. He places an emphasis on potency and virility for men versus affectionate touch and tenderness for women and posits that men’s “pleasure comes almost exclusively from orgasm” while for women “sex is much more about the mind and emotion.” He reports that in his experience, women are typically the low libido partner, and that “much of the power to prevent broken families is in the woman’s hands” by pushing through lack of desire to have sex anyway. These concepts have been explored by many other authors and do not add significantly to contemporary sexological discourse, which has largely moved away from a gender binary perspective on sex.

Nonetheless, Kedan offers a refreshing destigmatization around the discussion of sex. His book will most benefit those who identify with a Judeo-Christian approach to sexuality, who are struggling with sex and aging, or who have had difficulty starting a conversation with their spouse about sex.