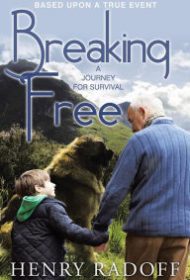 In his simple but well-drawn historical adventure, Breaking Free: A Journey for Survival, Henry Radoff pens a very human tale of ordinary people who find themselves suddenly tested by the extraordinary.

In November, 1938, a young doctor, Herschel, and his pregnant wife, Sofia, embark on a harrowing escape from Germany, fleeing with a band of travelers from their town of Freiberg,  just as the Nazis take power and the round-up of Jews begins. As the story unfolds, they dodge soldiers, traverse the Black Forest and ultimately forge an icy mountain to freedom in Switzerland— all with the able assist of the unlikeliest of guides, a dog named Prinz.

Radoff’s book is based on true events, which might explain why, despite its incredible plot, the storyline feels authentic and its characters— the newly pregnant Sofia who is uncertain how to break her news; the squabbling older couple who are, in fact, deeply devoted to each other; the old man left behind who gives them a crash course in mountain survival as Nazi soldiers close in—are genuine and engaging.

The journey is framed as a tale retold years later by a grandfather to his grandson. This device is particularly effective as it sets up the ultimate—albeit implausible—twist in the end. But mostly it works because of the interspersed interruptions by the grandson (“Did the rabbi have to die, Grandpa?”  “No, he did not have to die. It’s just what happened”), which reminds readers that what is now just a story is terrible history to some.

The book is short and would have benefitted from expansion to add depth. It’s unclear who Radoff sees as his target audience, but it probably works best for young readers because of its easy-to-follow plot. And while frightening, it doesn’t dwell on tragedy or violence. Adults might also enjoy the story, provided they don’t expect a fully developed historical novel. Overall, readers will find it worthy of their time.