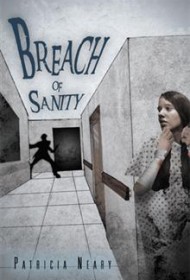 River’s Edge Mental Health Institute in Victoria, British Columbia, is the principal setting for the suspense thriller Breach of Sanity. Brilliant Dr. James Blake is hiding some secrets. One is a mysterious vaccine he has designed from a deadly pathogenic bacterium with the hope it will earn him praise in the scientific world. Blake also is hiding his mother, Alma, in a remote room of the asylum, where he keeps her drugged. None of his colleagues know that Alma not only committed a murder, but then sexually abused James from a young age, mentally damaging James and leading him to twisted, dangerous acts.

Frankie Martin, 15, unwittingly gets tangled in Blake’s evil web when admitted to River’s Edge after trying to commit suicide. Frankie has trust and anger issues after being abused in foster homes where she landed at age nine because her parents died in a car crash. Frankie ran from that trouble, but found life even rougher on the streets. As she fights to restore her life, Dr. Blake secretly makes Frankie’s days a living hell by repeatedly raping her and threatening her with death should she tell. Sandy, a nurse Frankie befriends, senses something is deeply wrong with Frankie’s situation and struggles to get to the truth.

While the writing is occasionally imprecise and strained (“Out of the corner of her peripheral vision…” and “Nervous energy formed on her palms…”), author Patricia Neary gets most things right. Her tightly written thriller has a solid plot, strong character development and backstories, vivid descriptive detail and good pacing, with numerous twists to build drama. What’s missing is the critical can’t-get-this-out-of-my-mind tension (think Stephen King) to kick the story into high gear because too many high-impact scenes tell rather than show. Example: “Frankie’s horror spilled out of her eyes in tears. Terror filled her every cell as she watched Blake undo one dead bolt after another…”