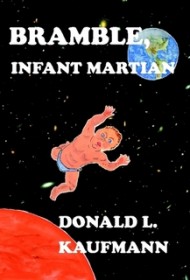 This massive, messy novel is great fun. Combining graphic eroticism, lively intellectual debate and interplanetary travel, it is the saga of a tireless wanderer/wastrel called Bramble, whose theaters of operation are as prosaic as a brewery in Pittsburgh and as exotic as the red surface of Mars, with intermediary stops in dozens of women’s bedrooms, a dead-on higher-education parody called Skyscraper University, the heat of Florida and the deep freeze of Alaska.

How to resist a doorstop of a book whose enormous supporting cast includes a nutty filmmaker called Lester DePester, a workaday prophet named Rylander the Third, an electro-shocked ballerina named Caron and “America’s foremost space poet,” the hugely overweight Geoffrey Curtis? The title character springs upon us from vaporous origins and rampages on for seven decades in a storyline that offers very little in the way of plot; readers are invited to simply jump in and hold on for the ride.

If they do so, the rewards will be immense. Donald L. Kaufmann, emeritus professor of English at the University of South Florida and author of two books about Norman Mailer, obviously loves the beauty and fragility of English (his narrator worries over “the high spots of a life dressed in the bones of language, words dying as they get born”), and he is never shy about parading his apparent influences: the raunchy knowingness of William S. Burroughs, the comic wonderment of Kurt Vonnegut, Jr. in science fiction mode and the pioneering hipster agitation of Mailer, to whose landmark essay “The White Negro” Bramble owes a special debt.

Kaufmann’s rollicking, freely-fornicating, deep-thinking title character could easily have been a Mailer creation himself. But let’s not diminish Kaufmann’s own huge ambition here, which seems to be a comic survey of American cultural history—beatniks to drugs to psychobabble to literary theory to personal transcendence to the yearning for other worlds—in the 20th century and beyond. Through it all, Bramble searches for “renaissance in America,” aware that utopia will be savaged by “a greasy barbarian jimmying open the back gate.”

This unruly, work of fiction (600 oversized pages) lacks discipline and design—characters and unrelated incidents careen through the text like pinballs—but it should prove satisfying for adventurous readers willing to take chances on experimental styles and surreal variations on traditional narrative. It’s a wild, surreal beast of a thing with lust in its loins and fire in its eye for all ideas, all fantasies, all modes of transport. Great read.