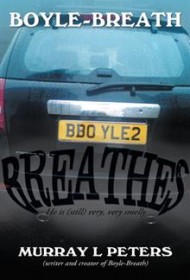 Scottish author Murray L. Peters’ tongue-in-cheek sequel to his 2010 Boyle-Breath – which revolved around a benevolent high school English teacher who happened to be a highly flatulent alien from Zeronia, a planet described as the “orb of incandescent love” – continues the story of said teacher, Bernard Boyle. His mission: to “save souls” by helping his students avoid the pitfalls of adolescence (bullying, gangs, drugs, etc.).

Boyle teaches at Roquefort High School in Scotland, where 12-year old Bernadette Burnett recently committed suicide. When he sees her spirit, the mentoring alien vows not only to learn why she killed herself but also to steer others away from making the same tragic decision. Other characters – such as bully Nikki Dedson, thug-in-training Paul Stenson and social worker Lynne Black – explore the issue from different perspectives. Related weighty subjects – specifically, the afterlife and reincarnation – are examined as well.

Although Boyle’s quirky sense of humor is initially endearing, the mediocre puns and references to gas quickly get stale. Some of the narrative is genuinely amusing, but the relentless irreverence ultimately weakens the story’s thematic force. The author delights, for example, in making light of funerals in this convoluted statement: “why had that word ‘fun’ in it [sic] and was it an anagram of ‘real fun’ for goodness sake? Another of God’s many little jokes?” He also finds amusement in the massacre at Columbine High School.

While the use of Scottish vernacular (stookie, for example) and grammatical errors (such as the awkward wording in the funeral quote above) make this novel a bit of a challenge to read, it’s the meandering storyline and overabundance of unfunny puns and asides that make the reading experience as indelicate as its gassy protagonist.