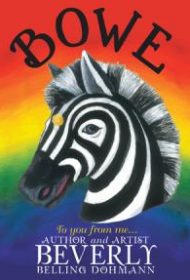 A fable-like tale with a feel-good ending, Bowe follows the story of a young zebra with unexpectedly colorful stripes.

While loved by his parents, zebra Bowe is often teased by other foals. No wonder that when he’s old enough to venture off on his own, he seeks out the “Mighty One,” a being powerful enough to remove his garish stripes.

During his journey, Bowe makes many friends and rescues an orphaned female zebra who hopes to find a family. The two finish the journey together and are rewarded by the Mighty One: Bowe’s colorful stripes are transformed into the rainbow, and the female zebra is told she and Bowe will have many children, creating a new family.

Young readers will find much to admire about Bowe. He’s kind to others even in risky situations (he rescues a drowning lion cub even though the pride had nearly killed him moments before) and cultivates a strong moral compass and comprehensible goals. Equally compelling are the illustrations, particularly the landscapes, which are dreamlike and skillfully rendered.

Despite a happy ending for Bowe, some readers will be disappointed that he doesn’t learn to appreciate his unique appearance, especially since many praised his beautiful coat during his journey. The resolution for the female zebra also misses opportunities. A husband is not an equal replacement for lost parents, and the assignment of a marriage by a third party (the Mighty One) feels heavy-handed. In addition, densely packed blocks of text with advanced language (“discussed” and “melodic,” for example) may make this a challenging book for some young readers.

Despite flaws in execution, the expressively illustrated Bowe provides enough lessons in kindness and generosity to make the long, complex read worthwhile.