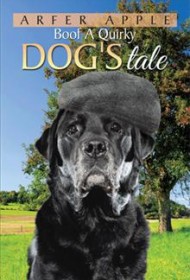 In this tale, a black lab dubbed “Boof” recounts the antics of his owner Bill Wayland and the other adults around him, as well as the dogs in his “legendary” Hitchings Way gang.

The story generally revolves around the Captain’s Crack pub and the back yard, where the gang, which includes “Terry the Terrier,” “Razor the Bulldog” and “Shepe the German Shepherd,” among others, meets beneath the cover of several apple trees. When not in the yard or at the pub, they relate Bill’s adventures in the “bouncy castle” with various women, such as Sweaty Betty, who is referred to as the “… local bike because every man in the area has ridden her at least once in their life, some more than once.”

The dogs’ owners are largely a cast of misfits, including Razor’s owners who are operating a meth lab. There are dogfights and dog bites, plenty of sex and jokes about it, arrests and a house fire, but even as bad things happen, the dogs generally live carefree, rollicking lives, and even the adults seem rarely impacted in any lasting manner.

This is a humorous take on the misadventures of adults as observed by man’s four-legged friends, who generally come across as more intelligent than their owners. In that, the writing succeeds, although the humor can come across as juvenile at times – such as a line about how Bill’s sister became a “gynaecologist [sic], much to her liking because she is a lesbian.” There is no real plot, but rather the ongoing accounting of daily life for both the dogs and humans, which can grow monotonous.

Oddly, there are myriad copyediting errors on the back book jacket, such as “beleive,” “quite” instead of “quiet” and numerous punctuation issues, which could scare potential readers away, but the writing inside is largely error-free. While this isn’t a book for everyone, readers with a fondness for dogs and adult humor will find solid entertainment in these pages.