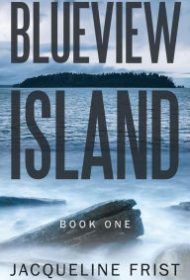 Young adult fiction with a supernatural bent no longer limits itself to a young audience; the Harry Potter books, for example, were republished with “adult” covers, proving there’s an appetite for these tales among readers of all ages. Jacqueline Frist is herself a young author, but with Blueview Island, she shows a knack for pacing and setting up cliffhangers that readers of many ages will enjoy.

Jayce and his twin sister Terri are spending the summer on an island resort owned by their grandfather, Theo. While working, they make fast friends with other teens, and gradually, the teens learn that they have a larger purpose: All have magical powers—one can summon fire, one can fly, etc— and were called to the island to stop an event that threatens their shared gifts.

Theo and his peers, it turns out, are part of an elite group who have made weapons and enchanted them in order to aid the group in their fight. When the teens aren’t manning the counter at the island’s gift shop, they’re training in quasi-magical combat.

Frist is skilled at setting up plot twists, ending with a nicely foreshadowed surprise. Fight training scenes in the island’s underground gym feel realistic (even though people can fly) and are snappily paced.

Unfortunately, the author’s characters are somewhat indistinct from one another. Generic descriptions of them laughing or smiling while making s’mores don’t allow individual personalities to emerge. More character development and detail would enhance the story. There’s a convincingly scary bad guy, but exactly what he wants and what he’s so angry about are left a bit vague; again, a bit more detail would help while not diluting the plot.

Nonetheless, Blueview Island keeps the action coming, combining young romance, good and evil, and magic—all winning staples of the young adult genre. While greater attention to detail would elevate the story, readers will find a well-paced adventure that leaves them hungry for Book Two.