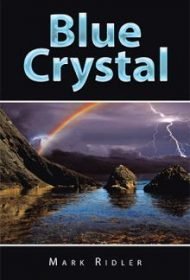 Mark Ridler’s thriller follows the machinations of American and British intelligence as they explore the effects of pioneering mind-control technologies.

The novel begins in Exeter, where a phenomenon dubbed “The Hum” is upsetting the local population, causing headaches and what seem to be aural hallucinations. It turns out, however, that the voices people are hearing are telepathic transmissions, and “The Hum” results from an electromagnetic pulse deployed by the U.S. government.

The pulse is part of Operation Blue Crystal, a series of American investigations into and experiments with telepathy and mind control. The CIA has chosen Exeter because it’s home to Leather Jacket Man (frequently referred to as LJM), a sometimes-patient in the city’s mental hospital. Due to his illness, LJM is highly sensitive to the voices the electromagnetic signals transmit.

British intelligence catches wind of the Operation, resulting in a series of tense phone conversations between Prime Minister David Cameron and President Barack Obama. The two leaders eventually agree to cooperate. That collegiality proves short-lived, however, when the Americans unleash a mobile version of the technology on the U.K.

Most of the novel follows the group of CIA officers charged with implementing Operation Blue Crystal. Their story unfolds largely through expository dialogue, as in this comment by one character: “If you study psychiatry, you’ll know that people suffer from a variety of mental illnesses. Actually, these represent extremes. Depression is Control, mania is Power, and neurosis is Panic….” This style often renders the narrative choppy and confusing. Additionally, the officer characters are underdeveloped. Although there are snatches of clever dialogue, readers never truly become invested.

The character of Leather Jacket Man is potentially intriguing, especially as he has roots in the author’s own experiences with mental illness. Thus, it’s disappointing that he, too, remains little more than a cipher.

While Blue Crystal has an exciting premise, greater character development and smoother exposition are needed before it’s likely to appeal to mainstream thriller fans.