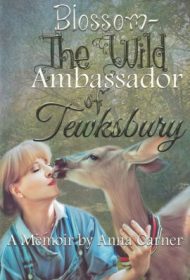 This riveting true story describes the astonishing bond created between a beautiful, wild creature and the woman who saved her.

In her memoir, Anna Carner, a farmer in Tewksbury, New Jersey, describes her life with a rescue deer she names Blossom. Carner found the newborn fawn “straining to breathe” and close to death. Gathering the mewling creature in her arms, she took it home, where she used her knowledge of animal husbandry and skills as a former paramedic to nurse the deer back to health. Blossom became a beloved pet, showering her humans with sloppy kisses and chasing apples in the yard. Eventually, she began to move easily between Carner’s Unicorn Hollow farm and her natural habitat in the surrounding forest.

As Blossom became a celebrity, Carner found herself at odds with the deeply held ethos of the local hunting community. Soon, she was fighting to save Blossom’s life. Carner adorned Blossom with a rainbow collar and hung posters imploring “Please Don’t Shoot Blossom, We Love Her.” She was met with threatening telephone calls and taunts from hunters who joked about “Blossom burgers”; one even attempted to poison the deer. Undaunted, Carner continued her campaign with fervor.

Blossom’s story is intertwined with the author’s recollections of long childhood hospitalizations resulting from a severe injury. Carner became a caretaker of sorts to other hospitalized children, and an interesting parallel backstory emerges.

The narrative is simply and eloquently written. Descriptions of Blossom—“…her ears rotated toward the quiet sounds around her, reminiscent of large satellite dishes searching for answers in the universe”—are elegant and immediate. Carner’s fear is palpable when Blossom’s life is threatened: “I considered running out, flailing and screaming like a wounded bird…”

Blossom’s extraordinary story defies traditionally held beliefs regarding the divide between man and nature and is likely to cause readers to reassess their assumptions about “wild” animals. It is sure to appeal to anyone who savors the beauty of our natural world.