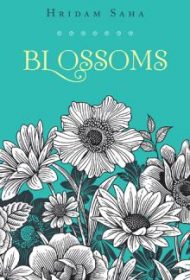 This chapbook contains 20 poems by Bahrain teenager Hridam Saha, written when the author was between the ages of 7 and 14.

The collection is divided into three brief sections: “The Undisguised,” “The Bridge,” and “The Blossoms.” Poems are presented mostly chronologically, although two pieces were written by Arpita Saha (a friend’s mother). The book blends rhyming and free verse poems.

The first section, which includes simple pencil sketches to illustrate each piece, offers poems Saha wrote from ages 7 through 11. Topics covered (parents, nature, home, pets, weather, etc.) and the style in which the work is presented (uneven meter, awkward phrasing, forced rhyme) are typical for this age group. For example, Saha writes: “So my tale started in 2003./ A child was born; that was me./ I was born on September 4/ To a family who became happy to the core.” The second section contains only three poems, one of which is written by Arpita Saha.

The writing style and subject matter show more maturity in the third section, which wisely omits the childlike drawings and includes six of the author’s poems written beginning in 2015. Topics include a new year, a tree, rain, forgiveness, and war. In “War,” Saha writes: “Let us change/ Our mine and me’s/ Into ours and we’s,/ Because together we can fight all enemies.//… War is not an answer.”

The poems in the first two sections are mostly ego-centric and repetitive without adherence to poetic rules or utilization of literary devices; the handful of poems in the third section shows definite improvement. The next chapbook could be far superior if the author culled his work to the most mature and meaningful poems, eliminating artwork unless professionally produced.

While this chapbook’s appeal to a general audience is limited, friends and family members will surely enjoy watching the young poet’s evolution from childhood to adolescence.