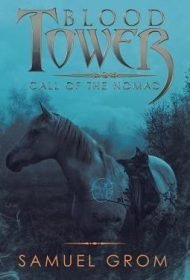 In this debut fantasy novel by Samuel Grom, the Earth as we know it has died and new species and problems are taking hold.

John Doe, a Reaper and Nomad, rides alone on horseback in a vast wasteland. Arriving in a new town, he encounters an execution about to take place, its target an old friend, Forbol. Challenged to save Forbol’s life by cleaving a giant cement object, John pulls out his sword and, with its startling blue flame, easily cuts the stone.

He and Forbol ride together to a large city, where John reunites with his wife and stepdaughter after a long separation and meets a diverse group gathering in secret to plot the overthrow of the militaristic King Vernpraf. Vernpraf is pitting different species against one another and fostering a doomsday religious cult that weakens the populace so they are more easily oppressed. Recognizing his participation in the regime’s overthrow as his destiny, John becomes part of a secret, then open, rebellion with far-reaching consequences.

Throughout Samuel Grom’s fantasy, the author offers quotations from various sources—literary, scientific, and personal—in the new world, adding another layer of interest. The winding plot features many imaginative touches, such as weird, warlike creatures with the bodies of kangaroos and pale, corpse-like humanoid faces. Of course, there’s also John Doe’s magic sword. Something new and momentous shakes up the narrative on almost every page, allowing excitement to build.

The book could benefit, though, from some judicious editing to correct punctuation errors and small but noticeable spelling slips, such as “to bare witness,” and “you’re” for “your.”

Blood Tower has suspense, movement, history and a highly engaging, very “human” cast despite some extra-human attributes. Grom’s opening foray is bold, with the potential to build a fantasy fan base that will anxiously await his next creation.