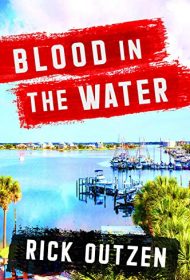 Rick Outzen’s gripping, action-packed Blood in the Water, is a sequel to his 2018 debut novel City of Grudges. It continues the investigative adventures of Walker Holmes, publisher of a struggling alt-weekly based in Pensacola, Florida, who endeavors to uncover the truth behind a deadly explosion that demolished a newly renovated detention facility.

The novel begins with the hard-drinking Holmes, beset with inner demons, in the midst of an impressively long bender and trying to come to grips with myriad personal issues, including: his girlfriend leaving him, a corrupt sheriff who has it out for him and his newspaper, and a murderer walking free on the streets taunting him with texts. But after a flood shuts down the city and the Booking and Detention Center inexplicably explodes, killing prisoners and a police officer, Holmes’s ex-wife becomes involved in the case and he’s forced out of his drunken stupor. Matters become complicated—and deadly—when Holmes and his staff uncover decades of grand-scale government corruption and police ties to white supremacist groups.

As knotty as the best-constructed mysteries, Outzen’s novel is unapologetically dark, and the writing style goes down like smooth bourbon, effortlessly consumable with a powerful narrative kick. Holmes is a complex but endearing antihero, not always doing the right thing but fueled by an, at times, twisted sense of morality and honor.

Outzen’s descriptive focus on the Florida Panhandle setting—in terms of culture, businesses, people, etc.—is a noteworthy strength. Secondary characters come to life and the various locales—such as a strip club called Benny’s Backseat Lounge—are so meticulously described that readers will be able to smell the cheap perfume and existential desperation.

Outzen’s writing is a seamless blend of the strengths of two legendary Floridian writers: the readability of Carl Hiaasen and the thematic impact of Charles Willeford. Powered by memorable characters, intricate plotlines, and deep themes, Blood in the Water is impossible to put down.