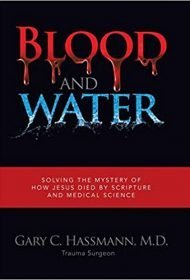 Doctors and theologians have long debated the cause of Jesus’s death, presenting numerous theories, from asphyxiation to a death blow by spear. For surgeon Gary C. Hassmann, these speculations not only “do not fulfill the prophetic scriptures,” they do not “satisfy the demands of modern medical science.”

In Blood and Water, the author presents his “findings from three decades of scriptural and medical research,” examining Old Testament prophecies foretelling Jesus’s death and linking them to Christ’s physical sufferings recorded in the New Testament. Hassmann’s verdict: death did not occur directly from crucifixion but from the “mental and physical sufferings” inflicted beforehand.

Central to Hassmann’s exploration is the religious and physical importance of blood and water. The author notes that, in Scripture these auguries often represent “healing, forgiveness, and salvation,” which allude to “the sacrificial blood of Christ” and a new covenant with God’s people, ultimately fulfilled in Jesus’s death and resurrection. In addition to the symbolic and theological implications he describes, the author also outlines eight pathophysiological conditions he believes contributed to Jesus’s death, including acute stress reaction (the intense fear of his impending death), intestinal obstruction (due to severe beating), and eventually the “collapse of Jesus’s cardiovascular system.” These responses, Hassmann believes, led to “rapid losses of blood and water.” Jesus’s loss becomes a gain for Christians, he posits, as blood and water would come to symbolize hope and new life for believers.

Hassmann presents compelling theories, his material is well-researched and annotated, and his arguments are logical and methodical. This is challenging reading, however, as the text is dense with medical and religious terminology bordering on the academic. He does include in-depth charts and a substantial glossary to help readers understand some of the medical and scriptural ideas offered.

Nonethess, Hassmann has done a yeoman’s job of offering a new look at Christ’s passion and crucifixion. Christians interested in the intersection of faith and science will find much to consider in these pages.