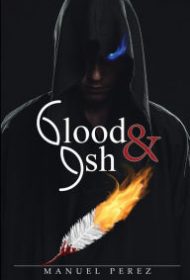 Manuel Perez’s briskly paced debut novel delivers a paranormal fantasy that revolves around an ongoing war between Good and Evil.

Ashley “Ash” Drake, a senior at MIT studying mechanical engineering, is a typical young man. He spends far too much time slacking off playing video games. But when a strange voice disrupts his gaming and tells him that a package will soon arrive at his dorm room, Ash’s existence is quickly turned upside down.

The package—which contains a disc player with disc, virtual reality goggles, and a gemstone—begins teaching Ash about his mind-blowing magical potential. Later, after Ash is introduced to a mentor known only as the Wizard, he realizes that he may be the Blessed One, the prophesized savior that could finally win the war between the Touched (essentially demons) and the Blessed (those “blessed by the light”).

Perez uses other intertwining storylines to further deepen and expand the plot. One revolves around New York City detective Nicholas Valle, who is attempting to solve a murder involving one of the Touched; another follows Sarah Blake, a succubus who is recruited by the godlike demon Nihalaus; and yet another centers on Aleister, an operative working for the Blessed who embarks on his own personal journey of salvation.

The war between Good and Evil—particularly demons and angels—is a tired convention in paranormal fantasy, but Perez breathes new life into the clichéd premise by fusing the Harry Potteresque wizards and wands concept with a decidedly “cool” contemporary backdrop. Online gaming; secret, subterranean command centers; arcane languages; exotic backdrops… all collectively give this storyline a welcome freshness.

The flaws are relatively minor. The character development could have been deeper. Valle, for example, is a cardboard cop stereotype. Additionally, there is an unevenness in the narrative: Some main characters are introduced and then seemingly forgotten for entire chapters.

That said, this is a noteworthy debut, one that should please fans of the genre.