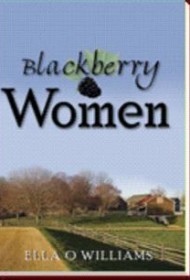 The hardscrabble life of an African American farming family in the 1930s provides the backdrop of Blackberry Women, a novel that recounts the ordeals faced by Mama, Papa and their 12 children. A better title might have been Blackberry Family since the focus is not limited to the women.

The family name is never revealed, but each member is extensively described, as is their difficult lifestyle. Household chores, caring for each other and managing the farm consume most of the family’s daily life. The gist of the story revolves around these day-to-day activities as each child grows into adulthood. The author chronicles a succession of poor decisions, such as bad marriages and alcoholism, as well as the achievement of two of the girls who attend college, one of whom even eventually writes a book about her large family.

The most interesting elements of the story lie in the characters’ efforts to keep the family running, from attending to household chores as basic as cooking, to the more tedious, yet demanding, work of picking cotton. The family struggles financially, but it appears there is always plenty of food on the table.

Unfortunately, author Ella O Williams’ narrative is inconsistent and burdened with too much contradictory detail. For example, she writes of the eldest daughter, Lola, and her feelings toward her family: “Lola didn’t like Mama begging for money, so she became angry and began to hate her family even more …” Yet, this is the first indication of Lola’s hostility. Then, with no transition, Williams writes, “Lola loved to visit Mama on Mother’s Day and bring her gifts.” Williams slips into the first-person voice toward the end of the novel (“… Mama was well enough to come home – so we all thought”), a choice which might have seemed appealing had she utilized it throughout the story.

Other distractions include several misspellings and incorrect word choices (“a viscous fistfight”; “a man’s Skelton”; and “ ‘Okay, girls, it’s time to go to the fair,’ Mama demanded”).

In the end, these issues detract from the novel’s readability and what could have been a powerful portrayal of triumph over adversity.