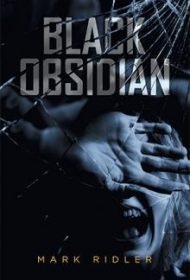 Mark Ridler’s new thriller, a sequel to Blue Crystal, picks up the adventures of “Leather Jacket Man” and the team of operatives investigating him.

LJM, as he is known, is an Oxford software engineer who suffers from bipolar disorder, which has given him telepathic sensitivity. In Black Obsidian, it turns out that his body also contains “negative mass,” a form of matter with unknown but potentially world-changing properties.

When British intelligence detects this negative mass, Julia, Henning and Kingsley, the investigative group from Blue Crystal, reunite and jump back into action. They recruit LJM, convincing him to help them find other carriers with similar telepathic skills. Later, LJM also agrees to assist the U.S. government. The government’s motive for finding the carriers, however, winds up being a sinister one, creating an ethical minefield for all involved.

Ridler’s narrative skill has greatly improved since Blue Crystal. Black Obsidian is much tighter and makes for more fluid reading. The banter among the operatives, LJM and his fellow carriers is frequently witty. The characters come across as regular people who just happen to have found themselves in an extraordinary situation, making them relatable and sympathetic.

Other areas, however, could use more refining. For instance, Ridler’s explanation of negative mass is difficult to follow. Granted, it’s intended to be a mysterious concept, but it comes off as more confusing than intriguing. Additionally, Ridler’s prose (aside from the often-excellent dialogue) is generally workmanlike, but shows occasional lapses (e.g., “’The decision is yours, Mr. President,’ advised his advisor.”)

Overall, Black Obsidian is an appealing tale, with the potential to entertain readers of spy capers and techno-thrillers. However, careful editing would help it better engage that audience.