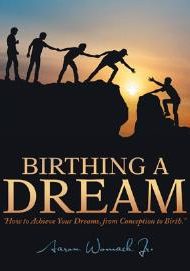 In Birthing a Dream, Aaron Womack, Jr. compares the stages of achieving goals to the three trimesters of a woman’s pregnancy.

Womack begins with a prologue that shares a heart-warming, life-altering event he experienced while coaching a high school basketball team. The moment catapulted him to unexpected national attention in newspapers, and on radio and television—and led him to in-depth exploration of commitment and its role in success.

The book’s first section consists of chapters named for concepts he associates with the first trimester of pregnancy, including “Conception” (having an idea or goal); “Birth Control” (which can keep you from becoming committed); stopping the “Cycles” of procrastination and more.

The second section focuses on the “Evidence” of your preparation to commit and “The Work Within” you that’s growing. The third section is about your commitment to “Becoming Visual” and the process of “Feeding Your Gift.”

The narrative contains numerous anecdotes from the author’s life.  Womack also shares advice, including how successful plans must contain belief, desire and faith. To transform wishes into reality, readers should list what they’ll do, no matter what; list what they may fail at today but will nevertheless do in the future; and include a daily reflection.

Womack’s passion for helping people achieve their dreams is clear. You can easily envision his effectiveness as a motivational speaker (something he does). The flaw, though, is that he pushes too hard to maintain the pregnancy. He says, for example, that you can tell if you’re truly committed to your goals if your “cycles” of procrastination stop and your pursuit of fulfilling your “cravings” begins. Taken individually, an analogy like this can seem reasonable, but over the course of the book, the comparison grows tiring and feels forced.

Womack has a gift for motivation and may well inspire some readers to focus on achieving dreams, but the book would be much more successful with a less rigid adherence to the birthing analogy.