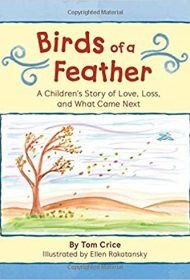 Tom Crice presents a touching tale of childhood, sorrow, remembrance, and renewal in his beautifully written picture book Birds of a Feather: A Children’s Story of Love, Loss, and What Came Next.

Crice serves as the first-person narrator in this book that is divided into five chapters. He uses finely honed, child-friendly sentences to tell of idyllic childhood days in the company of his grandfather, “Pop.” “Of all the people I knew,” he notes, “Pop was the only one who was always glad to see me, who liked me for the boy I was.”

Pop’s death is handled gracefully and perceptively: The body in the casket reminds the boy of an old television that was “fun until one day it stopped working. Then it wasn’t a television anymore. It was just a broken thing full of stuff that didn’t work.” Crice also writes about feeling unsatisfied with the platitudes offered by others, including a woman who tells him, “You should be happy because he’s in heaven now.” Crice bluntly reveals, “I wasn’t.”

Soon after, on an outing with his mother, the boy sees two birds enter a subway car. When they’re accidentally separated, he comes to realize that while they might never reunite, they have much to celebrate in their lives.

It’s hard to imagine a more comforting voice than Crice’s as he shares thoughts that any child facing a relative’s death can relate to. His childhood skepticism and resistance to the traditions of death only make his narrator’s voice more genuine and his final message—that life does go on—more convincing.

Rakatansky chooses not to show any human characters up close in her illustrations, a wise decision that makes the book more universal. Her soft pastel color palette matches the book’s tone perfectly, although her drawings are rather crude and could use more polish.

Still, Birds of a Feather is a wonderful story filled with sweetness—and an excellent tool for explaining mortality to children.