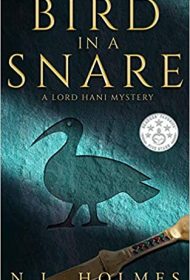 The pseudonymous N.L. Holmes’ first installment in her Lord Hani mystery series is set in pharaonic Egypt (approx. 1350 BCE) and revolves around an aging diplomat serving King Amenhotep III. His mission is to solve the murder of a bandit leader who played a key role in the king’s foreign policy.

Before his assassination, Abdi-ashirta headed a group of outlaws that roamed the northern boundary of the empire and sought to be recognized as king of that region. Because of a complicated political web of leaders and relationships, the king had wanted Abdi-ashirta alive. Now he tasks Hani with finding the killer.

The list of the dead man’s political adversaries is long, but when Amenhotep’s not unforeseen death and the ascension of his son throw the entire realm into chaos, Hani’s quest for the truth turns into one of survival.

Although the storyline is fueled by the impressively complex mystery, the novel’s real power is in Holmes’ meticulously described historical setting and her ability to create a cast of deeply portrayed and emotionally connective characters. Hani, for example, has a disabled daughter who was paralyzed in a freak accident disembarking from a boat, a firstborn son who has completely disregarded his teachings and dishonored the family name, and a devoted secretary who is a dwarf. Hani’s sensitivity and insight dealing with their respective issues deepens his character and makes the story more immersive and authentic.

Also, the author’s use of avian imagery throughout creates a subtle symbolic thread that inserts an additional layer to an already multi-tapestried read.

The one criticism is in the story’s unhurried pacing. Hani is traveling for much of the story—en route from one location to another—and although these sequences are appealing from a world-building perspective, they dampen narrative momentum and decrease page-turning tension.

Nevertheless, this is a highly compelling start to what could be a wildly successful mystery series: Hercule Poirot in ancient Egypt.