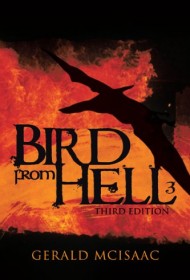 For armchair Bigfoot hunters, Gerald McIsaac is living the dream. Drawn from years of living with the Dene people in the remote mountains of British Columbia, Bird From Hell is his field report on fantastical mega fauna. Using stories of local villagers and his own research as evidence, he explains that Devil Birds, Lake Monsters, and giant Sasquatches exist in the wild today. The reason no one has found these creatures is simple, he posits: no one has ever looked.

McIsaac has spent much his life looking, particularly for the Devil Bird, a fearsome creature that attacks only after nightfall. He believes the Devil Bird is actually a pterodactyl, a descendant of flying dinosaurs. In fact, that’s his answer to almost all of the region’s mysteries. Women disappearing along the highway? Pterodactyls. A rumored clan of little people? Juvenile pre-flight pterodactyls. UFOs trailing lights across the sky? The glowing underbellies of pterodactyls.

Despite searching at night and scouring mountaintops for nests and eggs, McIsaac hasn’t spotted a pterodactyl himself. He’s never actually seen a rubber-faced bear or living woolly mammoth either. Yet even without first-hand evidence, he never wavers in his belief that these species exist.

However, the book stops being entertaining when he takes himself too seriously, blaming the scientific community for not supporting his efforts. He even ties his worldview to the Occupy movement, claiming that those who don’t believe wooly mammoths still roam are part of the oppressive capitalist one percent. Believing dinosaurs still exist is fun. But believing the rest of us are hell-bent on squashing such “revolutionary” thinking will only make readers question McIsaac’s judgment overall.