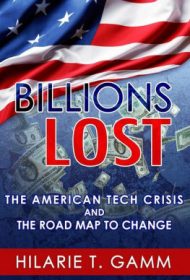 Presidential elections tend to elevate the national conversation about jobs, but once the hoopla is over, that conversation usually recedes to the state and municipal levels. Billions Lost author Hilarie Gamm argues that this fragmented approach is rooted in an American tech crisis that has substantially impacted today’s job market.

Drawing on her experiences as a C-suite tech executive, Gamm painstakingly describes the origins of this crisis, arguing that the Y2K scare at the turn of the century sparked a domino effect that triggered H2-1B visa reform. This resulted in the mass exodus of U.S. tech jobs to countries like India, which has since leveraged this brain drain, becoming a global tech powerhouse. In its wake, the U.S. economy, national security and educational systems have been weakened to the point that the middle class, once America’s backbone, has become a mere shadow of its former self.

The crisis demands a national solution, she says. Synthesizing viewpoints of a variety of forward-thinking industry leaders, Gamm provides 20 recommendations. The majority will be familiar to readers with even a passing interest in the crisis: increase telecommuting opportunities, expand the “gig” economy (contract jobs), leverage the experience of senior- aged workers. But others, like the call for eliminating federal and state taxes for workers 18 years and younger, are outside the norm.

Most readers will appreciate that the road map avoids partisan viewpoints, but some may wonder why it doesn’t include universal health care reform. Workers holding contract jobs without medical benefits know that one catastrophic illness can lead to financial ruin. Others may question why Gamm doesn’t argue for the creative reimagining of work itself, given the belief held by trusted futurists that many low-level tech jobs, wherever they are, may not survive the aggressive advance of artificial intelligence applications. While the author quotes a Wall Street Journal article positing that more jobs will be created through AI, many of these jobs will be inaccessible to those displaced, who won’t have the skills to perform them.

Nonetheless, Billions Lost is an excellent primer for understanding how the tech industry got into this thorny situation. Here’s hoping that policy-makers will act on Gamm’s important message.