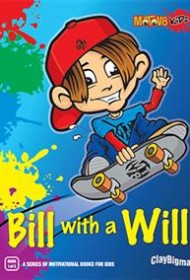 The first in a series of five Motiv8kidz picture books, Bill with a Will follows a boy with an upbeat personality and the drive to meet all his goals.

Readers are introduced to Bill on the first page. “I’m Bill, Bill, Bill with a will,” he tells us. “A will, a will, that’s why/I’m called Bill.” As the pages continue, Bill reiterates that he has a strong will and doesn’t believe in quitting. “’You never quit, for quitters don’t win’. [sic]/I smile and tell poppy [sic], with a great grin.”

Bill’s goals are fun and kid-oriented, such as climbing tall hills and learning to skateboard, but unfortunately, the story lacks necessary nuance. For instance, while Bill notes that having a will to succeed is applicable to many things, the examples presented are purely physical, such as building sand castles and sailing. As a result, his advice feels one-note and doesn’t encompass more cerebral or ambitious activities. Further, while willpower and self-confidence are crucial, adults will find themselves explaining that wanting something is not enough: Practice and patience are the true keys to success.

And finally, since the narrative progresses merely as a list of things that can be accomplished with enough willpower and lacks a plot, it becomes a bit redundant and less engaging than it might have been otherwise.

The overall narrative is also hampered by an unpolished writing style. Throughout the book, confusing and improper punctuation are compounded by an uneven rhyme scheme, making the text difficult to follow. For example, here’s a typical stanza: “What’s that you say,/‘No it can’t be’/But with a will,/it gives you a chance?/To show how you feel/and then make a stance.”

Young readers might enjoy the bright and trendy illustrations—and there is a lot to admire in the notable racial diversity presented in these graphics—but the story itself requires revision before it is likely to appeal to its target audience.