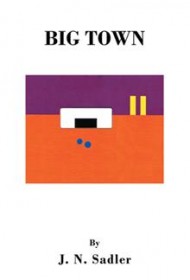 A morbidly overweight couple gets more than they bargained for when they check into a futuristic, government-sanctioned fat farm in this unusual novel from author Janet Sadler.

Rose Caledero and Bruno Weiler are big, big people, weighing 300 and 350 pounds, respectively. With their wedding on the horizon, Rose is lured into responding to a mysterious weight-loss advertisement.

Soon, the couple finds themselves in Big Town, a government-sanctioned “weight reduction energy plant.” Their overlord is the ruthless Steven Shadow, who works for a flamboyant sugar baron fittingly named Sugar Gannon. Under the relentless supervision of three sentient robots, Rose and Bruno are allowed to eat whatever they want, so long as they work a treadmill all day. Unbeknownst to them, their fat is also being siphoned off surgically in the middle of the night. “You have created an almost fool-proof way to lose weight,” Shadow tells Gannon. “After it is perfected…the government will have a healthier, happier public to deal with. They won’t even care if they have money. They will be thin, at last.”

After Rose’s mother panics, two rogue agents are sent in to infiltrate the facility: Willie Billicker, a good cop gone bad; and Bernie Crawford, a bumbling CIA agent. Things, as they do, go awry. Bruno is nearly killed during his treatments, while Bernie meets an untimely end at the hands of the rogue robots.

Some of the expository dialogue can be clunky at times. (“I’m so excited,” says Rose. “They say that the results are almost instantaneous, and the food is full of nutrients and is delicious!) But despite a few faults, Big Town remains an imaginative, high-pitched charade that uses America’s obesity epidemic to good end to satirize the weight loss industry via the shadowy antics of its men in black. Fans of malevolent satire from the likes of Max Barry or Chuck Palahniuk may find this futuristic nightmare to their liking.