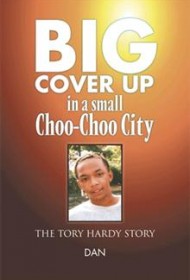 On June 9, 2003, unarmed 20-year-old black man Tory Hardy was walking home in Chattanooga, Tenn., when he was caught in the crossfire between two other men and killed. According to local media, the handling of the case became suspect because the man who shot Hardy was the son of the county attorney. Even the funeral home, then owned by a city council member, was caught up in the scandal, because Hardy’s internal organs were removed and discarded, allegedly to destroy evidence that would link the gun to the county attorney.

The tragic and infuriating events are chronicled in, Big Cover-Up in a Small Choo-Choo City. The slim volume is mostly written from the point of view of Hardy’s grandmother. Most effective is how she switches between the voice of Hardy and his presumed last thoughts as he lay bleeding and her own musings after hearing there had been a shooting at a local festival and wondering why she had not heard from her grandson on her birthday. All of the elements of a page turner are here, from the lingering racial tension in the South to the political machinations that protect the powerful.

Unfortunately, it is not clear what the book wants to be. A journalistic account needs more reporting to let readers understand all of the players and twists and turns. This is clearly a one-sided telling. Or perhaps it is meant to show how a tragedy upends a family? The grandmother — in real life Delores Williams, although the author uses the pseudonym “DAN” — writes briefly about reconciling her strong faith with a God who would let this happen. That also could make a fascinating book but sadly is also not explored in any real depth.

Still, despite its failings, this is a book worth reading if for no other reason than as a reminder that young black men die needlessly every day, leaving behind families who wonder why.