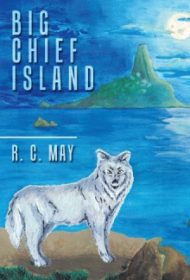 This classic tale of good versus evil pits two friends against a foe on a quest to retrieve a First Nation legendary treasure.

The story opens with an account of the National Club Hockey Championship in Buffalo, NY, in which college student Carl White Hawk is a star player. The author alternates passages about the game with scenes in Northern Canada, in which two present-day Rocnaya Nation warriors, Henry White Rock and Black Feather, compete to become the Nation’s newest brave. The winner will also be tasked with recovering the fire white rock from Big Chief Island, a sacred burial ground. The rock is believed to be crucial to helping the Nation recover from difficult times.

Soon, Carl enters this scene, fresh from the championship game, to visit Henry and lead a youth hockey camp near Rocnaya Nation. At this same camp years earlier, Henry and Carl met and formed a bond even deeper than they realize. From the moment Carl enters Rocnaya Nation, the Chief and others notice changes and soon understand that Carl, despite being an outsider, has been sent by the spirits to recover the fire white rock. Meanwhile, Black Feather has his own ideas…

This well plotted tale is steeped in Native mysticism, such as spirit markers, the mystical qualities of the silver wolf and the belief in guidance and protection from ancestral spirits. Henry and Carl are enjoyable characters, Henry with far-reaching knowledge of the Nation; Carl, the superstitious one with a penchant for Tootsie Pops.

The writing, however, features script-like formatting for dialogue (“YANA: You’re not a failure. HENRY: Yes, I am!”) that detracts from the story’s flow. And Black Feather is a one-dimensional villain, acting with ill intent in most everything he does. Numerous editing issues are also offputting, such as “but most have turn away,” and “now believe his fork tongue.”

Such issues are problematic. Still, readers interested in the First Nation culture may find rewards here.