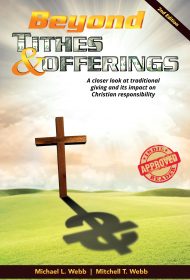 A tithe is a donation of one-tenth of a person’s earnings, given to support a church or synagogue. Tithing, or the act of donating that percentage of income, is a well-accepted practice in most Christian churches across the U.S. But brothers Michael L. and Mitchell T. Webb argue in Beyond Tithes & Offerings that it is a practice that needs to be reevaluated.

In the Old Testament, a tithe was originally an agricultural gift (e.g. new wine or olive oil) for those in need, such as widows. The Webb brothers note that proceeds from tithing today are most often used for church salaries and upkeep instead of providing for those less fortunate. Not only are most Christians missing the point, the authors contend, but this misunderstanding creates a slippery slope: Many parishioners who donate money feel like their job is done and that they don’t have to serve the needy. Others often feel rejected by church leadership because they can’t afford to donate so much of their salaries.

Ultimately, the authors believe that tithing does more harm than good and, if approached appropriately, should have nothing to do with money. Instead, it’s about engaging those in need through acts of kindness and mercy. Giving, the authors write, is supposed to be “done freely, liberally, and without strings…allowing Christians to mature spiritually.”

The Webb brothers are skilled teachers, offering a book that’s well-written, accessible, and thoroughly researched. The passages on offerings and sacrifices are thought-provoking and eye-opening, as is Chapter 8 which explores, among other things, the differences between Old Testament and New Testament covenants.

Ultimately, this book is about more than tithing. It’s a call to action for Christians to shift their focus from old ways of thinking and to place their attention on Jesus’ teaching to “love the Lord and thy neighbor.” Witty and sincere, this informative book should spark debate among Christians from all walks of life.