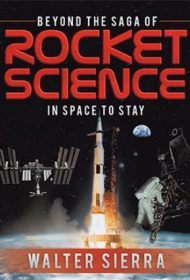 Walter Sierra continues his epic chronicle of the history of rocketry in Beyond the Saga of Rocket Science. While his first two volumes progressed from 3rd century China through the Cold War and the space race, this volume picks up with the race to the moon and culminates in the early 21st century.

Sierra jumps in with a minute-by-minute account of the Apollo 11 moon landing. Other historical milestones, including the fatal Apollo 1 fire and the calamities of space shuttles Challenger and Columbia, receive similar intense scrutiny. He delves deeply into the life of Wernher von Braun, who helped get America’s first satellite into orbit and launch the first moon mission, and includes thorough technical discussions regarding not just moon missions but also the Space Shuttle and Skylab projects. The book also contains charts, graphs, photographs, and numerous sidebars.

Overall, the book’s facts and figures are concrete and verifiable, and Sierra’s vast knowledge is impressive. However, the author’s technique of relaying some incidents as if writing historical fiction, complete with dialogue and first-person narration, is questionable. For example, he has astronaut Dick Scobee recount what it felt like when the Challenger exploded. Since Scobee and crew died in the accident and there’s no black box, this is grisly speculation.

Also, some may be troubled by the author’s penchant for offering personal opinion, such as his use of a photograph of a woman filing her nails to accompany his caption/commentary about the work habits of “lazy” government employees.

Other missteps include naming a section with a word spelled out in the Greek alphabet; the baffling non-sequitur about a Star Trek episode in a chapter on why the name Apollo was chosen for space missions; and inclusion of Playboy Playmate photos to accompany discussion of a prank pulled on the Apollo 12 crew.

While the above-mentioned flaws undercut the book’s credibility, readers will find value in its charts, graphs and other factual, historical information.