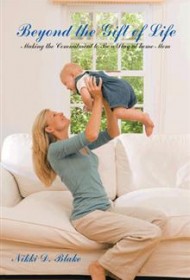 In her slim book Beyond the Gift of Life, Nikki Blake takes on a touchy and personal subject, arguing that the world would be a better place if more mothers stayed home with their children.

An English teacher who stayed home until her children were school age, Blake believes women are caught up in the struggle for power and equality in a male-dominated society and that they need to get over their irrational quest to “have it all” and instead find a sense of accomplishment in staying home with their kids, at least until they’re old enough to go to school.

She also maintains that the message women send their children when they leave them with a sitter to go to work is that money is more important than they are. She believes we wouldn’t have youth involved in gangs and violence if more mothers stayed home to nurture a sense of family and right and wrong in their children instead of earning money to acquire “things” they don’t necessarily need.

Mothers who have to work to pay for basic necessities such as rent and food will take issue with Blake’s book. While she recommends they find jobs they can do at home, that doesn’t help if those jobs pay far less than their brick-and-mortar jobs. Blake fails to take this into account, suggesting that mothers take at-home jobs that require no special training, including stuffing envelopes and assembling parts for small gadgets. She offers the usual recommendations for saving money: downsizing, eating out less and clipping coupons – which is a big part of what’s wrong with this book. Blake doesn’t offer anything we haven’t already heard from the mainstream media or friends, or even thought of ourselves.

Her argument is well written and convincing enough; and at a mere 66 pages, this is an easy read. However, it’s far from mandatory reading for those women trying to decide what’s best for their own families.