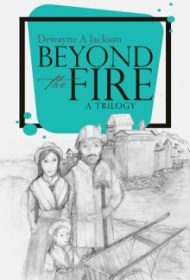 The fantasy genre is no stranger to concepts and values pulled straight from Western religion. For example, C.S. Lewis famously imbued his Narnia series with symbolism from the New Testament. And although giants of the genre like J.R.R. Tolkien and T.H. White were more subtle, their stories recalled epic tales from Christianity’s medieval period.

Dewayne A. Jackson takes the approach a step further in Beyond the Fire. This sprawling, multi-generational epic imagines a faraway, fantasy world peopled by unfamiliar tribes and marked by an alien geography, but imbued with the precepts of Judeo-Christian ideology.

An introduction depicts a country wife’s Christmastime visit to in-laws in a distant land. Destry Cotton is hesitant to leave the comfort of home to follow her husband to his home country of Amity with their young son, but tales spun at the hearth by her father-in-law reveal the locale’s importance.

The imagined country of Amity started as a refuge for followers of an unpopular religion, one that abided by ancient scriptures honoring the majesty of a single, all-knowing and all-powerful creator. Beset by persecution by the pagan powers-that-be, followers had fled to Amity to practice their religion in peace.

Jackson details the country’s history, beginning with the travails of Josiah Stafford, who flees an evil, idolatrous king in the mythical realm of Shingmar. From there, the author spins tales of families, tribes and a larger group of faithful followers centered in Amity on a scale and drama that echoes Old Testament parables.

Craftily fusing fantasy and theology, Jackson offers a narrative of depth and insight. His protagonists are animated with a deep faith, and his work in crafting a spiritual saga echoing the scope of scripture, down to its grammar and pacing, is impressive.

While the story has a narrower audience than most fantasy novels—it’s unlikely to appeal to agnostic or atheist readers, or those whose religious background isn’t Judeo-Christian—it’s bound to entrance fans of the genre with religious roots.