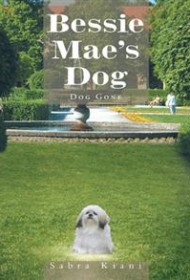 In Sabra Kiani’s novel, the disappearance of a Lhasa Apso dog named Poppy stirs up a lively mystery in the households of his owner, Bessie Mae, and her best friend, Julia.

The dog’s disappearance is at the heart of the novel that ultimately leads to a case of intellectual theft of a cancer-curing drug, fraud, the destruction of a major pharmaceutical company’s laboratory and murder. The protagonists, both retired secretaries, are likeable enough as you catch yourself rooting for the return of Poppy and successful sleuthing by Detective Jamison to solve the mystery.

Kiani builds her story line as briskly as Poppy’s romp in the park. But early on the author gives away too many details and drops too many clues, so by the time the case goes to trial, the story is a rehash and the reader is left with no elements of surprise.

The author breezes through what should have been a complex trial and intense jury deliberations. She also could use a tutorial in criminal justice as she merges the criminal case with what ordinarily would be a separate civil lawsuit. Julia’s son, Aaron, an attorney in private practice, is inexplicably hired to prosecute the case, which generally would pose a conflict of interest given his mother’s close ties to the proceedings.

While the novel has its flaws, Kiani’s writing is crisp and grabs the reader from the opening scene. Her dialogue is realistic. Plus, it’s refreshing to have two older women as key players in a modern-day novel. If readers can overlook the plot issues, they may appreciate the book on that level.