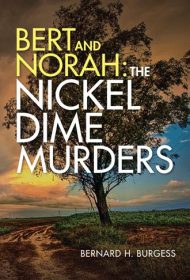 Bernard H. Burgess’ new mystery follows a husband-and-wife detective team and their unusual pet on the trail of a serial killer.

Volunteering for a scientific field investigation, Bert and Norah rescue an orphaned coyote-wolf hybrid (known as a “coywolf”) puppy and name her Missy. Missy turns out to possess remarkable intelligence and tracking abilities. Norah has extraordinary abilities, as well: she’s a psychic.

Bert previously worked for a P.I. firm, and he and Norah decide to open their own agency, combining his experience with Norah’s and Missy’s unusual talents. When a new client asks them to investigate her parents’ disappearance, Norah realizes they were murdered and has visions of more killings to come. As the bodies pile up, Bert, Norah and Missy crisscross the Upper Midwest in pursuit of the killer, who seems to have a preternatural ability to blend in with a crowd. Meanwhile, Norah must cope with the burden of her gift, especially when combined with her delicate physical health.

Burgess has created two appealing protagonists in Bert and Norah. They are decent, relatable and clearly very much in love. The addition of Missy to the proceedings is an enjoyable wrinkle; in fact, the novel could benefit from even more of her antics. Additionally, a twist involving Bert and Norah’s relationship is intriguing, and readers will likely be interested to see how it plays out in subsequent series entries.

Unfortunately, the plot itself isn’t entirely successful. Other than racing to solve the murders before someone else gets killed, the protagonists face no major setbacks or wrong turns. As a result, the tension never mounts in a page-turning way. And the killer’s identity, when finally revealed, feels arbitrary rather than tailored to the clues that have come before.

Overall, Burgess has created an excellent basis for a mystery series. A more carefully crafted plot, however, would do much to improve this story’s appeal.