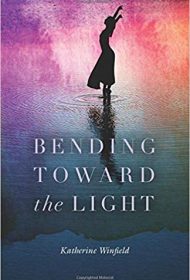 With evocative language and a passion for the natural landscape, Bending Toward the Light introduces us to Rory, who, after over 20 years, has finally decided to leave her emotionally abusive marriage.

Rory has thoughts of “what if” spinning through her head— what if she hadn’t become pregnant at 18 and married Derek?; what if she hadn’t given up dance?— Rory leaves Phoenix and, on a whim, drives to the small town of Willow Bend, California, where she rents a cottage and acquires a job at the local diner. The story moves between Willow Bend, scenes from Rory’s marriage, and snapshots from a traumatic period in her adolescence.

Winfield’s characters are complex and immensely likeable. We remain on Rory’s side even as she vacillates between desires: To flee to another town? To return to school? To track down an old flame? The communities Winfield builds feel comfortable and lived-in, and the bonds between Rory and the women in her life— her adult daughter, Jillian, her sister-in-law, Cass, and her neighbor, Marlena— are a source of inspiration and stability.

The importance of the natural landscape is evident from the first chapter: “Everything in Arizona seemed to be covered in a film of dust, as if the land was constantly trying to reclaim itself from humanity’s invasion.” Winfield is interested in how places make people, and what we can learn from each other’s traditions and cultures, and she investigates this with sensitivity and intelligence.

The collapse of Rory’s marriage to Derek isn’t fully explained or understood— readers would benefit from learning more about why the relationship failed. Additionally, the character of Marlena falls slightly flat when we first meet her, and merits more agency as a Native American woman also fleeing her past.

Regardless, Bending Toward the Light is a beautiful treatise on starting over, and will appeal to readers looking for a hopeful book about finding your place in the world.