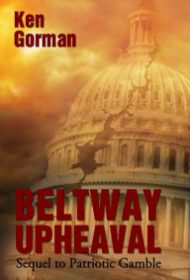 Ken Gorman’s Beltway Upheaval is a political novel about a U.S. presidential election that pushes the limits of the Constitution.

In this election, there’s no clear winner, and the House of Representatives chooses Democrat Herb Atkinsen as president; the Senate chooses Republican George Granger as vice president. However, Atkinsen, depressed over the deaths of his wife and a close friend, decides to resign on Inauguration Day, in favor of Granger. When Granger signs a far-reaching executive order to put the country on a firm financial footing, Speaker of the House Bob Allcott, cheated of his chance to become president, triggers impeachment proceedings.

Much of the set-up for these events has taken place before Upheaval opens, including the murder of an uncooperative elector and the resignation of the previous vice-president, who was involved in a sex scandal. As the story unfolds, there’s also an attempted murder, the invocation of the 25th Amendment, a power-hungry Speaker, and a female Democratic vice president. It should have been a galloping political thriller.

Unfortunately, the narrative is hampered by several flaws. Characters are stereotypical and unsympathetic: the vengeful Allcott with a shady past and a thug to do his dirty work; the cagey investigative reporter Cam Tucker. The only female character, Vice President Joan Mulligan, is whiny, weak and indecisive, with neither the believable strength nor intelligence to step into the role of president.

The story also stretches credibility. Despite the unusual election and same-day Presidential inauguration/ resignation/ inauguration, there are no public protests, no court cases, and little Congressional pushback until the executive order and impeachment. The necessary political information reads like a bulleted high school history lesson. Whenever a new character is introduced, there’s voluminous backstory that has little to do with the storyline. Dialogue is limited and stilted, and the climactic moment is far too pat.

As a result of these many issues, the story falters. Despite a promising conceit, Beltway Upheaval will likely have limited appeal.