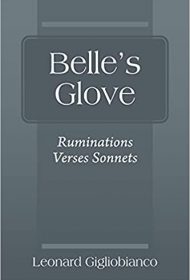 Belle’s Glove: Ruminations Verses Sonnets by Mario Gigliobianco is a poetry collection that is largely elegiac in tone and purpose. His poems seem to be influenced by several distinguished poets from different eras, such as Homer and H.D., who feature in the many epigraphs to individual poems.

Gigliobianco’s work often reaches toward the epic. It also has a gothic preoccupation with decay, such as the long poem “Elegy Written in Winter,” which contains the imagistic lines: “Seems a vein substrate lift. Their flesh, cracked, hung/ Upside down as moonlight stains some cut source./ Stagnant red pools, stillborn plea for mercy.”

Many pieces eulogize the permanently lost, as “Sanctuaries,” which urges readers to consider: “What the insides of time look like:/ here is the Eden of the price tag, a plate/ of glass placed over a pane of the dodo.” Even though the title implies a certain kind of refuge—the caress of a glove, perhaps—the overall mood is of memorializing and examining the relentless passage of time.

The poet excels in displaying his wide-ranging imagination through vivid imagery and his rich incorporation of literary allusions. Nearly every poem contains evocative images, such as: “Canyon walls peel in my mouth”; “Arrow teardrops fly”; “Shadows grab their guns.”

While such moments heighten the work, the collection also has a few flaws. The poems lack tonal variety, as many feel the same in choices of diction, rhythm, and line length. Additionally, most of the pieces are a bit purple and wordy in their descriptions and could benefit from some reining in, as in “Statues,” which includes these grandiose lines: “Glory’s proclitic marble seals the spangling corpses./ Looming twilights lead us to a gilded humming receding.”

Despite such issues, readers who appreciate a bit of baroque gloom tossed with a somewhat archaic style will find many rewards in this collection.