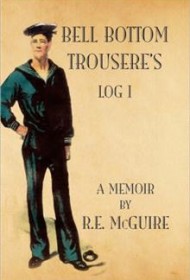 Returning home from his tour with the Civilian Conservation Corps in 1941, 17-year-old Shaun McCall looks at the depressed economy, recognizes his limited options and promptly joins the US Navy. Bell Bottom Trousere’s – Log I follows McCall’s journey from his first dignity-stripping physical to his shipping out to parts unknown after Pearl Harbor.

Along the way, he grows from a raw and confused recruit into a levelheaded young man determined to succeed. He learns to follow orders, even if those orders have him shooting a fleeing man or trying to obey two officers at once and landing in the brig. During this time, he also faces the death of his beloved mother and romantic heartbreak. Overcoming all, he eventually achieves his goal of becoming Seaman Second Class.

Bell Bottom Trousere’s is well written (despite what seems to be a major misspelling of “trousers” in the title) and occasionally lyrical: “Taps came across their bodies … like draping a security blanket … the day was done.” There are some very nice character interactions, such as the scene involving young sailors sitting in skivvies helping a shipmate write to his girlfriend. Unfortunately, the tale lacks a strong story arc with a central compelling crisis and the resulting high-stakes consequence that makes a memoir unforgettable. This is less a story and more of a detailed diary of events listed in great detail. One 14-line paragraph tells how to tie leggings; another 25-line paragraph describes a launch and motor.

This book will appeal to those deeply interested in what it was like to be a US Navy recruit in 1941, while casual readers will likely become overwhelmed by the exhaustive detail and set the book aside.