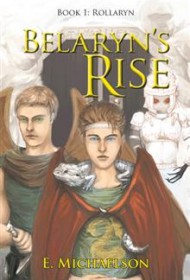 E. Michaelson’s debut Belaryn’s Rise: Book 1: Rollaryn is set on Kamrynian VII, a planet whose humanoid inhabitants are facing an imminent crisis: the seemingly-infinite magic that defines their lives may be finite—and close to running out. Kamrynian VII’s rulers, the evil Council of Wizards, are suppressing this information, however, so it is up to Belaryn, a gifted Magi, and his family, to find a way to save their world.

Though Michaelson’s vision has potential, Belaryn’s Rise has serious problems. The amount of pointless detail about the Kamrynians and their culture dramatically slows the pace of the novel, destroying any sense of urgency or imminent threat. The characters float through the novel considering what to do over the course of years, and despite the alleged constant peril from the Council, none of them seem particularly concerned by such. For example, after Belaryn’s mate reveals her identity as last of the line of Kamrynian emperors—a secret that could lead to her and her entire family being executed— it’s decided that her family will, rather than hoarding the information, disclose it to “those that they felt inspired to tell.”

Belaryn’s Rise is also frustratingly repetitious. Michaelson seems to have no confidence in his audience’s ability to retain information. After 171 pages of the characters using magic and telepathic communication, we are told, “Because magic is a major factor in a Kamryinan’s life, they have the benefit of a form of telepathy, the ability to speak mind to mind.”

While fantasy fans may find things to enjoy in Belaryn’s Rise, Michaelson, if he decides to continue with his trilogy, should consider that there are larger novels—nay, series—that establish tension over years and aren’t bogged down by constant reiteration of the same points. He would do well to study those stories before progressing with his own.