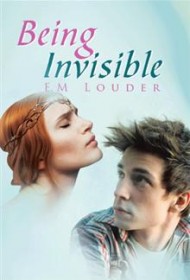 Being Invisible is a contemporary adult romance novel set in Melbourne, Australia. It is the first in a trilogy.

University student Misha is callous, aloof and feels invisible. Angry and sullen, her life changes when her only friend Ellen’s footballer brother Jake comes to the university to make a fresh start from his own chaotic life. The two are thrown together, and Misha finds her softer side developing as they fight, make up, overcome jealous misunderstandings and thwart a kidnapping by Jake’s stalker.

Romance readers will enjoy the genre’s usual, if predictable, formula on display here, but they will have to endure sharing the first part of their read with a thoroughly unpleasant heroine. Initially, Misha wields an unrelenting, sulky adolescent attitude, as in: “To be honest, I don’t really care, [sic] if they can’t take my smart ass mouth, and crass sense of humour [sic], than [sic] tough shit.” It is only around page 40 that she begins to soften and only at page 80 that we learn that her toughness comes from an attempted rape by her mother’s drunken one-night-stand. The reader may also be disappointed that the romance formula is strictly followed with no surprises.

On the plus side, the characters are well developed and believable, and Misha’s change from isolation and hostility to being capable of love is a reasonable progression. The story is written in first-person narrative, much like a diary, so there is limited dialogue, but that dialogue is character specific and appropriate.

While the plot’s formula follows all the tenets of the genre, the target audience for the book is uncertain. Teenagers will identify with Misha’s petulantly contrary attitude, but adults might find it exhausting. Meanwhile, the explicit sexual content and graphic language are definitely for adult readers only. A more thorough copyedit for punctuation and other technical issues would also have made this a better read.