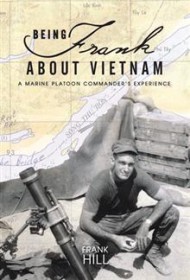 Frank Hill’s startling memoir is an unvarnished look at his 1968-69 tour of duty in Vietnam. “War is like living in a cesspool,” he writes. “At first the stench of napalm and death is incomprehensible.” But soon, he adds, “Killing and death is just another day at work.”

At 22, a recent college graduate and newlywed, Hill underwent Marine Corps officer training and shipped out to Vietnam. In vivid prose, Hill takes readers along as he leads his platoon in a fierce battle zone 20 miles south of Da Nang, home to a major air base used by the South Vietnamese and U.S. military.

Hill doesn’t avoid sharing the ambivalence he felt at times about the war (although not his role in it). One of his first “kills” as a platoon leader, for example, was of a mother water buffalo that became agitated and advanced on him when he entered a village. Soldiers are indoctrinated to “win hearts” of Vietnamese civilians, but “How many hearts did I win today?” he muses, noting that water buffalo, used as “tractors” by Vietnamese farmers, were important to their survival. Hill also describes a practice known as “fragging,” when soldiers desperate to leave the war purposefully injured themselves during battle.

Such stories lend an immediacy and legitimacy to the memoir, as do the annotated photos and letters sprinkled throughout that Hill wrote to his wife, and the pages devoted to his wife’s reflections on events at home during his tour.

Except for the preface, Hill forgoes political commentary. His final chapter aptly explores his post-war emotional wounds and struggle to let go of a crushing sense of guilt. (The ending is marred only by his misspelling of “veil” when he writes how his buried pain created a “vail” of self-protection around him.)

Overall, this is a remarkably authentic and moving personal account of America’s least popular war.