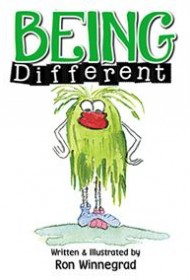 In Being Different, writer and illustrator Ron Winnegrad has created a pep talk of a picture book for people who feel they are out of the ordinary. The book also encourages those who feel more a part of the mainstream to “embrace” the differences of others.

The book includes charming, whimsical illustrations that feature a colorful mop-headed character who admits that “it is difficult being thought to be different.” While noting that people may talk and laugh behind a person’s back for being unusual, the character urges his audience to follow their hearts, nonetheless.

The sentiment is worthy without doubt, but its delivery is hampered by the book’s failure to understand its target audience. Many of the concepts and vocabulary introduced here will likely be over the heads of young children, the audience one would expect for a picture book. For instance, Winnegrad writes, “If you are not hurting anyone or curtailing anyone’s liberty, then dare to be!” The words “curtailing” and “liberty,” seem out of the reach of most youngsters.

Similarly, he writes of the roles spaces play in music, painting and philosophy, as observed by Debussy, Cezanne and Lao Tzu, noting: “…Debussy said music is the space between the notes and Cezanne said space in a painting makes the observer’s imagination work.” This is thought-provoking fare, to be sure, but it’s bound to perplex all but the most intellectual tots. When he follows this up with, “So being accused of having so much space between my ears is not bad,” his attempt at humor is likely to be lost on children unfamiliar with that expression.

Being Different offers a positive and praiseworthy motivational message enhanced by some winning illustrations. But despite these pluses, it remains off target for the picture book audience.