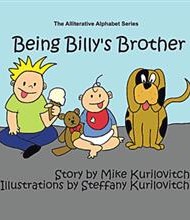 Being Billy’s Brother deals with the universal theme of sibling/new baby relationships. In this simple picture book story, the narrator (known only as “Billy’s brother”) admits that at first, he “wasn’t keen on being Billy’s brother.” He then seesaws between boredom and having a blast as a big brother, drawing the line at one chore: “Powdering his little behind? I don’t think so!” Billy’s brother then imagines the fun things that they’ll do together as Billy gets older. In the end, he proclaims that brother means “buddy,” and being Billy’s brother is the best.

While the theme meets a need for children experiencing new sibling relationships, this is not the author’s stated purpose for this picture book. In a note to young readers, Kurilovitch indicates that the book series is designed to change the way they feel about reading and writing. He explains how alliteration was used in the book, then encourages readers to write a similar story. Other books in the series will feature different alliterative poetry and writing styles, with quick lessons on writing stories in those styles.

Although that goal is admirable, Being Billy’s Brother may not be the best example for writing instruction. Many children who would learn from and enjoy hearing this book read to them are not at the independent reader and writer stage of development. Older children may find the book babyish. Further, the approximately 300-word book would have benefitted from careful proofreading.

Being Billy’s Brother will likely see more success as a sibling-relationship book than as a teaching tool for writing alliterative stories. Young children will delight in the simple illustrations by the author’s daughter and will relate to the mixed emotions of having a baby in the family. Parents will appreciate the positive progression demonstrated in the story in accepting the role of older sibling.