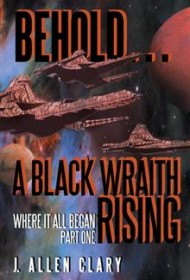 Behold…A Black Wraith Rising is a grand-scale military science fiction novel. While well plotted, it suffers from a lack of character development and world building.

From the novel’s subtitle (Where It All Began), it’s evident that this is a pre-history of sorts—a precursor to some future and presumably even bigger interstellar conflict. The story begins after a brutal war between planets Jadus I and Jadus II. On victorious Jadus I, the populace falls into decades of civil war. When a global government is finally established—one whose goal is to exist without aggression or oppression—the civilization effectively rises from the ashes to build spaceships with unparalleled scientific advancements.

But the populace is forced to deal with a new threat from an old enemy: Samin Bladen, the ruthless prime chancellor of Jadus II. A power-hungry tyrant who has much larger plans than ruling just one planet, Bladen’s evil machinations soon lead him to become supreme chancellor of the Seven World Alliance. When a long imprisoned Jadus I prince, Kadan Gladden—confined since being on the losing end of the civil war—escapes the planet and joins forces with Bladen, the sentient races of the universe are unprepared for the havoc the morally bankrupt egomaniac is about to unleash.

The military choreographing is meticulously plotted, to the story’s credit. Unfortunately, the characters are all two-dimensional, and the novel lacks emotional depth as a result; readers will feel little connection with any of the characters. Meanwhile, the various worlds are also thinly realized. The planets are essentially points on a star map, with no focus on local flora, fauna, or anything that makes the worlds unique. That sense of wonder vital to any science fiction storyline is conspicuously missing here.

In the end, these factors prove too much for readers to overcome. While the storyline is promising, the slimly drawn characters and worlds make for a forgettable read overall.