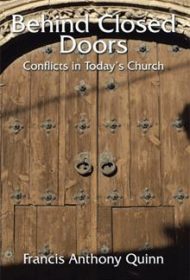 This engaging novel centers on challenges, conflicts and turmoil within the lives of three priests grappling with a changing world and church upheaval.

In shifting narratives, the book follows three boys, beginning before WWII, as they become friends in a San Francisco seminary and take different paths after becoming priests. Ambitious David faces continued opposition from a group fearing his views stray too far from the conservative church doctrine. Ladd, who maintains a sometimes-controversial friendship with a woman, finds fulfillment in international relief work but unwittingly is caught up in a plot threatening the Pope. Chaste Tyler, who grapples with celibacy, becomes the target of a sexual molestation case.

This often passionate, sometimes dramatic and occasionally preachy novel thrives because of fully developed, rich characters presented in a strong, emotional context. However, the narrative is also flawed by a story driven less by a solidly drawn plot than by what seems like three intersecting fictionalized memoirs – as if the author is telling the real-life stories of friends or acquaintances, adding some drama for good measure. The stories fail to coalesce into a solid,  satisfying conclusion.

Nonetheless, the author, a bishop emeritus, clearly knows his subject. He also has a flair for writing, such as this description of parishioners’ relief after stifling noises during a sacred part of Mass. Afterwards, “all the coughs and sniffles inhibited during the consecration formed a firecracker series of soft percussions.” Humor also emerges, as in a third grader’s take on Easter, noting that after Jesus came back from the dead and out of the tomb,  “then he saw his shadow and went back in.”

This is a novel steeped in the church’s efforts to adapt to a changing worldview and its affect on the priesthood. As such, it’s likely to appeal predominantly to Roman Catholic readers. Overall, it’s an intimate story whose power derives from the way it humanizes the lives of priests while incorporating some action along the way.