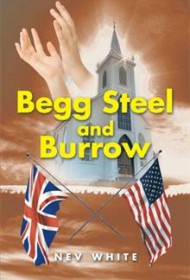 A young man struggles to be successful after a difficult early start in prison in this ambitious but disjointed story that is juxtaposed with his brother’s later life.

Set in mid-1900s Great Britain, the novel is set up in an “as told to” format. Protagonist Percy, an old man dying of cancer, is relating the details of his past to Sally Randle, who is writing his biography. He spells out his time managing professional wrestlers involved in fixed matches as well as his finding (on a jail mate’s tip) a million pounds of hidden loot, then trying to conceal it from shifty people bent on murder.

Percy’s brother, Billy, who was adopted by a Welsh family as a child after both of his parents died, is mentioned only in passing, until two-thirds into the book, when the author presents Billy’s point of view. Here, the book focuses on Billy’s desire to do church work and organize a traveling choir group after having retired from singing on pleasure cruises. In the final pages, the story newly focuses on the lives and some tragedy involving Billy’s daughter and her husband.

In this scattered story of redemption, author Nev White does a commendable job developing the believable, sympathetic character of Percy. However, the book’s numerous supporting characters—some with clever names including Flatnose Ted, Ringside Ronnie, Snake-eyes Eddy and Elbow Ernie—are flatly drawn in comparison; they seem provided simply to move the narrative along.

The author’s text has few technical blemishes and occasionally is punctuated with well-conceived emotional passages, such as when a “delirious, cold and shivering” Percy struggles to understand why he is being physically tormented before death. But as a whole, the plot lacks clear direction and a satisfying climax, and is watered down by the telling of a life rather than showing riveting action.

In short, while the novel is stuffed with activity, it is never as engaging as it should be, due to the flaws mentioned.