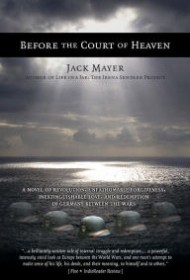 Before the Court of Heaven is enthralling historical fiction based on the true story and subsequent legends of Ernst Techow, a German assassin turned French legionnaire.

Told in two parts, the story is recounted in the first half largely through flashbacks to Techow’s childhood and young adulthood from 1908 to 1922. He develops anti-Semitic views at the ‘Wandervögel’ youth camp, a nationalistic environment where he hears lectures about Jews being part of an “Evil Trinity” and absorbs their malevolent message. Such ideas eventually spur him to assist in the assassination of the Jewish Foreign Minister Walther Rathenau.

The second half details his time in prison, where his cellmate “Puck” changes his racist attitude, and his release into a divided Germany. As the Nazis rise to power, Techow flees Germany for his life and joins the French Resistance, but is forever haunted by his role in the assassination.

Techow is an incredibly well-rounded and flawed character, which makes his transformation over time all the more fascinating. It’s easy to despise him in the first half for his anti-Semitism; when a Jewish woman is beaten and killed in front of him, his only concern is that her blood will stain the upholstery. Yet readers can still appreciate his love of art and literature and feel empathy when his father dies. The author’s writing style is, by turns, lively and detail oriented in all the right places.

Although the novel is meticulously researched, with maps and information about the historical characters included, two characters have been added to create a love triangle subplot that consumes a large portion of the narrative. While it provides a much-needed female character in an otherwise male-driven story, it also adds unnecessary drama in a story that already had plenty.

Despite this inclusion, the novel is gripping from the very first line. This is an immersive, exciting, and often heart-breaking story that will engross any reader interested in this period of history.