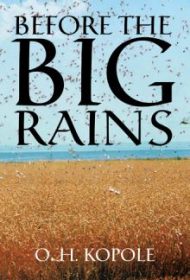 As the book begins, an assassination attempt has just been made on Paramount Chief Thaga by his twin brother, Sera. While the attempt fails, the chief dies soon afterward. Twins are believed to be a bad omen in the clan and are usually killed at birth. The decision to allow this set of twins to live has set in motion a chain of violence and the eventual tyrannical reign of Chief Sera, who is “paranoid and possessed by anger” (and whose morality is “at risk of total extinction”). As Chief Thaga’s son works to reclaim his birthright from afar, readers are carried through plot twists and intrigue, rife with combat, torture, duplicity and banishment.

Secondary characters prove to be the most interesting, including Sera’s wife Mokitlana, a Lady Macbeth-like persona who provides the driving force behind many of Sera’s deadly plans. She exhibits a greed and callousness that sets her apart from the other female clan members described.

The majority of Kopole’s characters, however, lack three-dimensionality, and while the story is adequately written, the plot lacks background and context for character motivation. Without emotionality or a unique use of language that would elevate the story, readers are left with a plotline that is difficult to care about or engage with fully.

Additionally, readers aren’t told the specific region or time period in which the story is set. Words like kgoro and kraals, from the South African Sotho language are used, indicating there may be some cultural basis for this account. The novel would be enhanced with the inclusion of a prologue or epilogue detailing the culture that inspired the story.

Despite such shortcomings, the premise is interesting and the action plentiful. Those who enjoy action-oriented stories will find rewards here.